My vegetable garden has always been plagued by cucumber beetles, so this year I finally made an attempt at DIY traps, inspired by instructions posted by Lee & Pinero (2016) and Shee (2019). I’m posting details below in case anyone would like to make their own or might be able to suggest improvements.

For the traps I repurposed some Spartan Mosquito Pro Techs and one Spartan Mosquito Eradicator that I had sitting around, first spray-painting the tubes with Krylon Gloss Sun Yellow and the caps with Oleum Spring Green — to emulate yellow flowers subtended by green calyces.

Then I drilled multiple 11/64″ holes in the tube and in the cap (which already had several) to allow entrances for the beetles.

To attract the beetles I purchased a packet of lures made by AgBio, which I cut up into 5 pieces and stuck to strips of yellow sticky cards. These strips were then placed inside the tubes.

I’ve caught several beetles in each of the tubes, though not the hundreds I was hoping for. All of them were striped cucumber beetles (Acalymma vittatum). Not quite a complete failure, but close.

One likely explanation for the low number of beetles is that cutting the lure into small pieces reduced the attractiveness below some needed threshold. But those lures are so expensive I can’t really stomach using one per tube. What I’d ideally like is a way to use cheaper aromatic oils and scents to make a more affordable lure. I suspect some combination of corn silk oil, cucumber oil, clove oil, etc., would work if I had infinite time to test.

If anyone out there has made traps and can offer some suggestions, I’d be grateful. 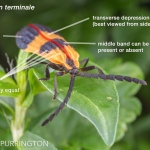 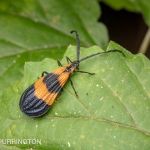