Even though “garter snake” has been the common name for Thamnophis sirtalis for over 200 years, I discovered this week that people who know a lot about garter snakes don’t agree on why. There are two theories: (1) the snakes were named after stocking garters and (2) sirtalis is the Latin word for stocking garters and thus the common name was derived from the Latin binomial. I know, not a burning question for most, but I was curious given that snake fans seem to choose one or the other without further mentioning why. So I looked into it.

(1) Most articles, books, and websites explaining the common name suggest it’s because the snakes resemble garters, pieces of fabric that were fastened right below one’s knee (the garet, in Celtic) to keep stockings from falling down (that used to be a huge problem). The resemblance is lost on most people today, especially guys who don’t know their lingerie history, because garters are now frilly and made of silk or satin and thus not at all snake-like. But back in early Europe they often had lines and patterns that could easily remind somebody of the stripes and scales of a snake. And everyone wore them: women, men, even kings, so they were ubiquitous, visible, and probably conversation starters. So it’s not surprising that somebody eventually referred to a particular type of snake as a “garter” snake.

In etymology it’s important to establish when a particular word first appears, so I consulted the Online Etymology Dictionary and learned that garter snake first shows up in 1775, in the United States. The Online Etymology Dictionary says the name is related to stocking garter but doesn’t provide proof of this or any links. Curious, I found that “garter snake” shows up even earlier, in 1773, in a description of specimens in somebody’s collection in Lichfield, England. Again, there is no explanation of why the common name was garter. I’m sure the first usage of “garter snake” goes back even further, too, if you had access to a good database of letters and newspaper articles from the time. I don’t.

(2) A potentially related hypothesis for the common name is that sirtalis means “like a garter”. This is exactly the claim thousands of scientists and naturalists make. If true, then the common name might have been launched when Linnaeus published his classification in 1758. Alternatively, maybe it just confirms that he knew of the common name and simply applied the Latin cognate for the species. But I was suspicious of this claim because when Latin was a living language there weren’t stockings or the need for garters. Sure enough, when you look up sirtalis in a Latin dictionary, it’s not there. Like many of words Linnaeus used in his binomials, he made it up by combining Latin and Greek roots, leaving us to guess at what the new word might mean. Kraig Adler theorizes that the word might be a combination of siro (Greek for cord, rope, or string) and talis (Latin for such, the like), and thus might mean “ropelike”. So when people claim that sirtalis means “like a garter”, they are incorrect. The first appearance of the “like a garter” claim seems to in 1976, in Robert Parker Hodge’s Amphibians and reptiles in Alaska, the Yukon, and Northwest Territories. I don’t own the book so I’m not sure if he cites somebody, in turn.

Although sirtalis does not mean “like a garter”, I guess it’s possible that Linnaeus had garters in mind when he concocted a rope-like species name for the snake. He probably wore garters, and perhaps called these snakes “garter snakes” before he officially named them. The question, then, is whether the common name predates his scientific name. In looking into this I discovered a second common name that I think was borrowed from German or Dutch: kouse band. The French use serpent jarretier (jarretier means garter), and Swedes use strumpebandssnok. Anyway, it seems that everyone in 1790s Europe, regardless of language, called them snakes-that-look-like-garters. Would be nice to know which language first started to call them by the respective name, but to do that I think I’d need something other than Google’s English-based book search. Note that the 1773 date I mentioned above was found with Google, and thus is probably simply related to my usage of the English-language version. There are likely other databases out there without such language problems.

A deservedly rare explanation for how the garter snake got its name is that it is a misspelling of guarder snake, garden snake, gardener snake, or garten snake. Some of these variants are quite common on the internet, and I think most people can blame their parents. 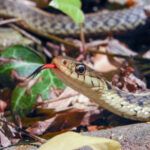