Found two of these caterpillars on blackberry last week.

I really should have brought them back home to see if they would eat morning glory leaves. Apparently they hate morning glory despite being named Schizura ipomoea (and thus traditionally called a morning glory prominent). Also sometimes referred to as the false unicorn prominent. You can distinguish the checkered-fringe from the unicorn prominent (Schizura unicornis) on the basis of head striping (among other differences). But don’t handle them during the identification process: they spray mixture of formic and acetic acid from that dorsal horn on abdominal segment one, and that will hurt and make your skin blister.

According to one study, these caterpillars coat the tissues of freshly-girdled tree stems with fluid. The authors guess that the fluid contains something that blocks the de novo production of chemical defenses in the leaves. This “chew and spit” behavior seems to be common in the family (Notodontidae). More details and papers on the behavior at David Dussourd’s website. 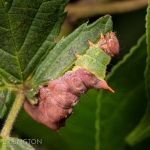