Mosquito Authority, Mosquito Joe, Mosquito Platoon, Mosquito Shield, Mosquito Squad, TruGreen, and many other companies often imply that the insecticides they spray on yards are safe for everything except mosquitoes. These companies are also very reluctant to reveal what chemicals they use. This page contains information on what, exactly, they spray and what effects those chemicals have.

After a little digging, I think I’ve uncovered most of the active ingredients used by these companies:

Please email me if you think I’ve made an error or if you know that a formulation has changed (which happens). All of the chemicals are either pyrethrins or pyrethroids, which are natural and synthetic (respectively) neurotoxins that cause almost instant paralysis and death to mosquitoes. Below is the chemical structure for one, permethrin:

Are these chemicals safe for humans?

Pyrethroids are relatively safe but should not be viewed as harmless. If you spill enough on your skin you might experience itchiness, numbness, nausea, and respiratory problems, among a rather long list of adverse events. Although you obviously can’t test whether pyrethroids harm human brains, studies on mice and rats suggest that the chemicals do act on mammalian nervous systems; that should at least give you pause if you have kids rolling around on the grass after the yard gets dosed. Indeed, there is at least one correlational study that suggests exposure to pyrethroids is not good for kids (or at least boys). There are also scattered reports that some pyrethroids are carcinogenic and estrogenic but I don’t think such effects are shockingly large, and to date they seem to be restricted to mouse studies. At very high doses pyrethroids can kill you, a fact known because some people have injected it (suicide) and in one case because somebody ate food that was cooked in pyrethroid concentrate (it resembles cooking oil).

Are pyrethroids safe for pets?

Dogs and chickens seem to be fine. Cats, however, lack sufficient levels of a liver enzyme that helps detoxify pyrethroids and can thus develop what is called pyrethroid toxicosis. A good indicator of cat sensitivity to pyrethroids is the standard warning of keeping cats away from pyrethroid-treated dogs. I.e., if you dose your dog with a large amount of pyrethroids (to kill fleas, e.g.), cats that cuddle with the dog are at risk. If you’d like to see a video of rag doll cat with pyrethroid poisoning (you probably don’t), here’s a video.

Do pyrethroids kill other animals?

For example, the spray kills monarch caterpillars, even weeks later later due to the presence of insecticide dried onto milkweed leaves (Oberhuaser et al. 2006).

And the spray can kill honey bees, even if honey bees are inside their hives when the pyrethroids are spayed (workers bring small amounts back to the hive the following day if they land on treated plants or if they find small puddles of water to drink). Sublethal amounts of pyrethroids can change honey bee behavior and make workers smaller. I would imagine the pyrethroids would end up in the honey, too.

And pyrethroids kill fireflies, which are most active in a yard in the late evening when mosquito-spraying franchises like to fog.

My favorite group of unnoticed insects that are killed by evening pyrethroid applications are solitary bees, of which there are approximately 4,000 species in the United States. These are bees that collect pollen and nectar during the day but spend their evenings and nights in holes (e.g., mason bees) or clamped to low vegetation. E.g., look at this a two-spotted long-horned bee (Melissodes bimaculatus) from my front yard this summer. Everyone has dozens of species of native bees in their yards but few people realize it. So when pesticide applicators claim their pyrethroid sprays “don’t harm bees” or are “bee friendly”, that is entirely untrue. It’s simply a marketing slogan they were taught when they bought the franchise, and they will insist it’s true even when presented with evidence to the contrary.

Anyone using a spraying service is, therefore, killing all of the above and more. Insects are small and easy to ignore, but if you were to go out after a spraying and look very carefully, you’d find thousands of dead insects on the ground. And only an extremely small percentage would be mosquitoes.

Pyrethroids can kill ALL arthropods, in fact, not just insects. So if a yard is sprayed, likely you’d likely find dead spiders, mites, centipedes, and millipedes.

One obvious consequence of gassing all the arthropods in a yard is that bird species that eat arthropods will have a lot less to eat. Population levels of swallows and flycatchers, for example, have dropped in last several decades and one explanation is that there are fewer insects to eat.

And then there are fish, which are acutely sensitive to pyrethroids. Franchise owners will generally avoid spraying near people’s fish ponds and bodies of water. Indeed, by law pyrethroids can’t be used near water, though there are many reports of franchises ignoring that regulation. Even if a property doesn’t have a pond or stream, pyrethroids are rather stable in the soil and tend to get washed into nearby streams after rains. It is increasingly accepted that runoff of pyrethroids into creeks can kill fish downstream.

Finally, pyrethroids are toxic to certain earthworms. This is probably especially true for those species that come out onto lawn surfaces in the evening, when pyrethroids are often applied. To be honest, many people don’t really care about earthworms (some hate them) but for people who love aerated lawns it should be pointed out that fogging with pyrethroids might result in less aeration. And, perhaps, result in robins that wonder where all the worms have gone.

Note that people who spray their yards with pyrethroids will still have butterflies, fireflies, etc. They just won’t have as many, and likely the some of the ones they do see are from the neighbors’ yards. And people who have their yards sprayed with pesticides invariably won’t perceive the drop in wildlife numbers and will likely truly believe that the sprays are harmless to everything but mosquitoes. Confirmation bias is a fundamental part of human nature. And, of course, everyone believes they are immune to confirmation bias.

As you might expect, plants that depend on pollinators are likely to have reduced seed production if dosed with an insecticide. E.g., Brittany Harris found reduced reproductive success of rare plants in Florida when they were located near houses sprayed with insecticide. Pyrethroids can also harm plants directly (e.g., Tu 1981, Bragança et al. 2018).

Pyrethoids are engineered to last for weeks

As mentioned above, pyrethroids adhere to plant surfaces and stay chemically active for weeks, so the risk to all the organisms mentioned above can last for weeks. Here’s a a description of pyrethroid persistence that I found on a Mosquito Squad FAQ:

“How can the barrier spray continue to kill mosquitoes for 21 days? Mosquitoes will feed on plant juices. When they attempt to feed on sprayed leaves, the residual from the spray will kill them.“

Mosquitoes don’t eat leaves, of course, but the quote is correct about the fate of insects that walk on treated leaves. Pesticide franchises like to claim that once their product is dry it is no longer toxic, but that claim makes no logical sense in light of their claim that the product provides protection for three weeks. Some pyrethroids can even last for 90 days if they are on shaded surfaces.

There doesn’t seem to be a Federal law requiring either signage or neighbor notification when a yard is sprayed with insecticide, and state laws are variable (here’s a good review; here’s another). Many states have laws that require applicators to leave signs at properties that have been sprayed, and some require notification of neighbors prior to spraying. For example, most counties in New York require that neighbors be notified 48 hours before spraying (details). That’s also an option for beekeepers in some states, too; in that case the pesticide applicators need to search a database of hives in a town, then notify hive owners when spraying will happen.

I live in Pennsylvania, one of several states that allows people to be placed on a Pesticide Hypersensitivity Registry. Once on it, pesticide applicators will know you have a medical issue with pesticides and they are obliged to inform you of future spraying (so you can leave the area).

If you want to know what rules might apply in your state, Googling “pesticide notification laws regulations residential pennsylvania” (replace with your state) will get you started. If that doesn’t help just contact your state agency that regulates pesticide use. Towns and cities will sometimes have their own rules but some states prohibit such rules.

How local governments can help

All towns and cities should maintain a web page that provides mosquito information and relevant pesticide laws to residents. Towns can also enact ordinances on third-party pesticide applications. For example, a town might require that franchises alert neighbors 48 hours before spraying is done.

State governments can also make sure that pesticide franchises are not making false claims. E.g., if companies claim through words or imagery that their pyrethroid-containing sprays are “environmentally friendly,” “bee friendly,” “kid friendly,” “pet friendly,” or government approved (e.g., “EPA-approved”), sue them. Massachusetts did, and now has several restrictions on advertising including a ban on ads that “rely on images of young children to convey a sense of harmlessness“. Almost all sites I’ve looked at have misleading wording, especially the claim that pyrethroid-containing sprays “target” mosquitoes and ticks (completely false; they do no such thing).

Although spraying pyrethroids might be a good way to kill mosquitoes near the ground and in low shrubs, many mosquito species spend most of their time high up in the canopies of trees and are untouched by sprays. For example, many species in the genus Culex (transmitters of West Nile virus, St. Louis encephalitis, eastern equine encephalitis, western encephalitis, avian malaria, etc.) are tree dwellers and only occasionally come down to feed on humans and pets. This limitation isn’t just theoretical: one study showed spraying didn’t reduce numbers of Culex at all. So if you have trees and birds, don’t expect that spraying will be effective.

But I don’t want to imply that spraying is completely ineffective. Pyrethroid fogs will probably kill a large percentage of Anopheles spp. (vectors of malaria) and Aedes spp. (vectors of dengue, yellow fever, Zika, etc.) because these species are more likely to be lower in the vegetation.

Many pest-control companies offer a garlic-based spray, too. I haven’t been able to find any scientific publication on these sprays. They might work. But they might also just cater to people’s hopes. Ask the company for printed efficacy data and pass if all they give are testimonials and promises. If you know of a peer-reviewed article showing that garlic spray kills and/or repels mosquitoes, please contact me and I’ll include here.

For about $4,000, some companies will install systems that dispense pyrethroids over your yard at regular intervals. Don’t do this. Just don’t.

Here are my tips. 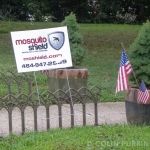 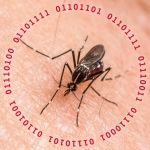 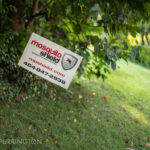