Tobacco hornworm (Manduca sexta) caterpillars have stripes (seven of them), so remember that by thinking of Lucky Strikes cigarettes (seven is a lucky number; stripes sort of rhymes with strikes). Plus the horn on a tobacco hornworm is usually red or red-tipped, like a cigarette. Tobacco hornworms also have black shadows on their stripes, and and tobacco gives you dark teeth and lungs.

Tomato hornworms (Manduca quinquemaculata) have eight chevrons (Vs), which you can remember by thinking of V8 juice, which is primarily tomato juice.

Here’s a graphic that summarizes the above:

And here it is drinking nectar with just one leg grasping a flower for balance (it was a windy day):

And here’s the snowberry clearwing moth doing the same:

And here they are together, a pairing that took me days of work to capture:

Day-active, colorful moths are rare enough, but these take it to the next level in their uncanny mimicry of hummingbirds and bumblebees, respectively. The mimicry presumably protects them from being eaten by predators such as crab spiders, praying mantids, and birds. In addition to the obvious behavioral and morphological resemblance to hummingbirds and bumblebees, the moths also make a slight humming noise that completes the disguise. The noise could easily be an unavoidable consequence of hovering flight (approximately 30 beats/second), but I wouldn’t be at all surprised if their wings are rigged in some way to exaggerate the noise. I’d love to know the answer to that. My other burning question is why the hummingbird clearwing moth has clear wings at all … I would expect selection to favor individuals that did not lose scales, because such a mutant would more resemble a hummingbird, which has opaque wings. I’m guessing that reason is not because fully-scaled wings are too heavy — the hummingbird hawk moth (Macroglossum stellatarum) in the Old World has opaque wings and can manage 70-90 beats/second (wow). I wonder whether a fully scaled wing might damp the humming sound. All photographs were taken at Natural Lands Trust’s Hildacy Farm Preserve in Media, Pennsylvania. Oh, and happy National Moth Week. 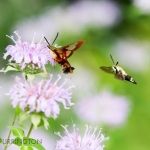 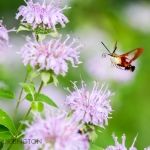 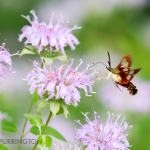 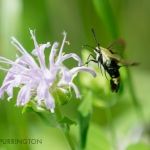