I think this is Eris flava, but happy to be corrected. Like every jumping spider I’ve photographed it held onto its prey even while I chased it around the leaf to get the shot. I think I’ve seen a jumping spider discard its prey only once, and perhaps that instance was a spider that had pretty much finished the meal. If you know of any papers on the topic of prey retention under threat, I’d be interested.

If you’re curious, the fly probably isn’t dead yet. Just paralyzed and being digested from within with enzymes injected by the spider. I’d wager the process is exquisitely unpleasant for the fly. I’m assuming the spider moves to different parts of the fly to access different pockets of muscle and such but I couldn’t confirm that in the literature.

If you’re interested in identifying something that’s similar, there’s a useful paper on differences of E. flava and E. militaris by Madison 1986 (pdf), but illustrations of the head are only of males. Photographs and other information are at BugGuide.

Pyractomena borealis (Lampyridae) exploring the surface of trees on a warm winter day in February. At first I thought it might be foraging — they are highly predaceous, and hunt slugs and earthworms (in packs!) by first injecting them with paralytics. But it turns out they are just looking for a place to pupate.

Here is a close-up of the fully retractable head. Those mandibles are hollow.

Adults of this species will emerge from pupae sometime in early Spring to be the first fireflies in the area.

The larvae are bioluminescent, too, by the way. The hypothesis about why the larvae glow is that it evolved first as an aposematic trait in larvae, warning mice and toads of the presence of lucibufagins, steroidal toxins in the hemolymph. It’s thought that the adult habit of using flashes is secondarily evolved, millions of years after the larvae evolved the ability to glow. The ability of larvae to glow even predates the origin of the Lampyridae, I gather. For more enlightening details, see Branham and Wezel (2003), Stanger-Hall et al. (2007), and Martin et al. 2017.

UPDATE: Sarah Lloyd has identified the slime mold below as Cribraria aurantiaca.

Plasmodial slime molds (class Myxogastria) come in many colors (yellow, purple, orange, blue, red), but rarely in green, so this find at a local park intrigued me. I found it February 23 under the bark of a decaying pine tree in Springfield, Pennsylvania. There were no fruiting bodies.

I’m curious what species it is (let me know, if you know, please), but would love to know why it’s green. Here are three possibilities (I have more, if they fail): (1) the slime mold has formed an association with an algae or cyanobacteria, (2) the green pigment replaces the yellow pigment under some conditions, and (3) this is a species of slime mold that’s green but not frequently encountered so not part of books and online keys. The latter two are most likely, but the first was interesting to consider … see below if you have a few minutes.

(1) In regards to algal associations, I looked into this option first because the green appeared so exactly like that of alga. Of course, I’d never, ever heard of algal/myxomycetes symbiosis, so I looked into this possibility very, very quietly so people wouldn’t spew coffee out their noses. But I eventually found an article on the topic (Lazo, W. 1961.Growth of green algae with Myxomycete plasmodia. American Midland Naturalist 65:381-383). Here’s the summary from his abstract:

“Three species of Chlorella were able to enter into full associations with Physarum didermoides and Fuligo cinerea, forming green plasmodia in which the algae multiplied in light.”

The above association was under special laboratory circumstances, however, notably using slime molds that he’d purged of their bacterial partners with antibacterials. But even though the conditions might seem artificial, I suspect slime molds have a built-in ability to purge themselves (and surrounding substrate) of bacteria. And algae are easily found growing in soil and on dead trees, so it’s very likely that slime molds and algae come into contact in the wild regularly. And algae (or at least some species like Chlorella) can grow heterotrophically in the dark (e.g., on sucrose) and still remain green. This latter fact is important because I found this slime mold under rather thick bark, and I doubt it received any appreciable light.

Indeed, some plasmodial slime molds appear to even specialize on the algal biofilms growing on wood (reviewed in Smith 2007). One mentioned by Smith is Barbeyella minutissima, which I Googled and found this:

“In addition to liverworts, Barbeyella is found socialised with monocellular algae. It is assumed that the protoplasmodium phagocytizes either the algae or the bacteria on their surface.”  — Global Fungal Red List Initiative

Smith also mentions that a Didymium iridis plasmodium harbored an alga (Trebouxia sp.) for months in a laboratory culture (Keller and Braun 1999; I couldn’t obtain to read).

So if the above scenario does occur, perhaps it’s similar to the trick noticed in some Dictyostelium spp. (cellular slime molds, in the class Dictyostelia), which known to carry around bacteria, which they can release onto substrates that are favorable for bacteria (i.e., they farm).

Anyway, I don’t have a microscope to examine the slime mold for algae or cyanobacteria, so the above is just mere speculation. I suppose I could spray it with a good herbicide, but that’s seems cruel.

(2) The green color might simply be a pigment change. I don’t know much about myxogastrid pigments, but apparently moisture, light, starvation and other environmental factors all cause color changes. But I could find only a few papers discussing a green pigment. Here’s the best line from one of them:

“The yellow pigment of P. polycephalum has been found to be an excellent natural pH indicator (Seifriz & Zetzmann, 1935). In a neutral medium, the natural indicator is yellow, in an alkaline medium it is bright green, and in an acid medium it is deep reddish orange.” Seifriz and Russell (1936) [emphasis added]

The above fact is really interesting, but don’t know why a decaying pine log would become alkaline. I couldn’t find any good research on the topic, but perhaps I missed it.

The more interesting scenario is that a pigment gene is mutated. Mutations happen, though it’s rare enough that I don’t think it’s likely.

(3) It’s of course most likely that there’s a species of green slime mold and I’m simply ignorant of its existence. Maybe it’s not even a slime mold. 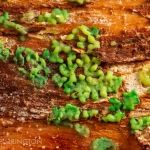 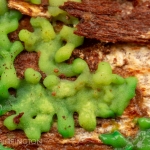