Photographers tend to loathe tumblr and related sites because they operate by using other people’s copyrighted material, gathered into collections to compete for Likes and Reblogs.  So I decided to take tumblr for a spin to see how alarmed I should be. In particular, I was curious how images get loaded onto tumblr pages and whether the company promotes conscientious copyright etiquette.  Screenshot of my site (http://colinpurrington.tumblr.com) is below if you’ve never seen a tumblr site before. [More below the image…]

And below is typical upload screen, toggled slightly to show how one can use an image’s URL to post.  There is a separate field on the right-hand side to paste the content source URL.  Because I host my photographs on SmugMug, I paste the photograph’s “gallery” link in the content source box, and that URL is automatically duplicated by tumblr into the “set a click-through link” box.  Now, if anyone ever clicked on one of my images (it might happen!), they would be transported to the photograph in question, but it would be displayed amid other photos in the same gallery (that’s good, because adjacent photographs might also be of interest). 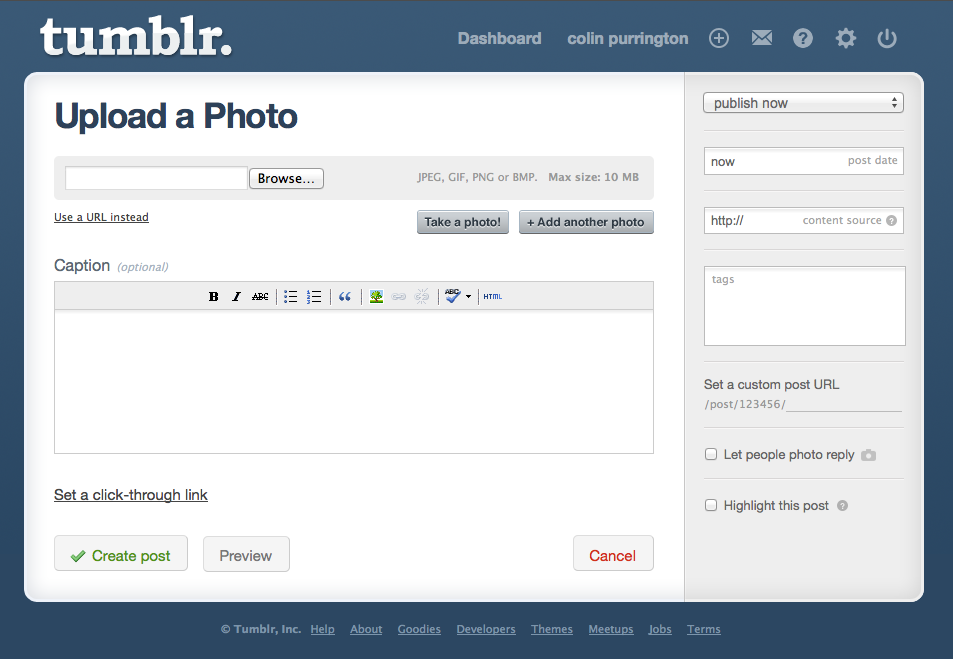 So when posters conscientiously specify source and click-through URLs, that information will then (sometimes) be displayed.  Here’s an example:

But the above scenario is rare, and usually your photograph will be displayed without any of the embedded information.  This is where I have the most misgivings about tumblr HQ — they are in a position to dictate that all “themes” (tumblr accounts can be equipped with one of thousands of styles) must show image source/credit, but they do no such thing.  If Tumblr has the look and sound of Myspace, and your credit information is lost in the mess. That’s why you really should watermark all of your images.  For me, I’ve just placed my name on them.  But you could also put source URL on the image itself.  Just do something.

Many photographers stay away from tumblr because they think it will promote image theft, but I think it can go both ways.  When you post your own images on tumblr, it gives a way for people to share your images in a controlled way, albeit imperfect. Doing so could actually drive traffic back to your site, since people these days rarely come out to browse photographers’ web sites. I.e., the same reason photographers are starting to duplicate their galleries onto facebook.  It also gives you insight in how to craft your “using my photographs” paragraph that you might have somewhere on your main photography site.  E.g., if you know the details of tumblr (or Pinterest, or We Heart It, or whatever thefting site is popular tomorrow), you can use the proper language to tell people how they may properly credit your work.  Or, if you don’t want your work used at all, having knowledge of how the sites work will improve your ability to find technical fixes that block that use.

Whether you have a tumblr account or not, you’re going to find your stuff on tumblr if you search for it (find it by tineye.com, or search tumblr for your name). Just contact the tumblr user and ask them to adjust the settings so that the image is specified by a URL and that it has the click-through destination you prefer — they can change those in under a minute, and some of them like this woman specifically ask for corrections:

Of course, that only works if you can contact the owner of the tumblr account, and I’d estimate only 1% of pages have contact information (don’t ask me why).  If you have a tumblr account and “follow” them, then you can send Fan Mail. Or if you don’t want to deal with the violator of your copyright, just shoot a take-down request to support@tumblr.com (details) and they’ll pull the image within hours (I’ve found).

I few months ago I migrated my 10,000+ Flickr photographs to SmugMug, and deeply regret it.  So I’m sharing the problems just in case my pain can help others:

So, after months of discovering the problems above, I think I’m going to delete my 10,000+ SmugMug photographs and slowly re-upload from the originals in my Aperture library. I could “replace” each photo individually, but that process doesn’t fix the keyword problem.

Anyway, hope the above might help somebody, and if you are wondering why my photo site is empty, that’s why. I’m still a fan of SmugMug, but not a fan of migrating photos there.