Nature pics from a July 2021 trip to Highlands Hammock State Park with my sister and father. The park is situated on dunes that formed during the Pleistocene (approximately 650,000 years ago), during a period when most of current-day Florida was below water. The above-ground portion at the time, an island, is now known as the Lake Wales Ridge. It’s packed with biological gems.

Hiking trail on the higher, xeric part of the park. That’s beach sand from the Pleistocene. And crawling with tiger beetles.

Scabrous tiger beetle (Cicindela scabrosa). In case you haven’t spent time taking photographs of tiger beetles, I’d just like to point out that it’s hard. They are skittish and fast, so I had to approach slowly, prostrate, using my elbows to ratchet myself close enough for a shot. I was covered in sand, plus dripping in sweat. Per Ted MacRae’s blog post on the species, Cicindela scrabrosa and several other species likely evolved when the Lake Wales Ridge was an island.

Trap-jaw ant (Odontomachus sp.) in the grips of an antlion. You can just barely make out the antlion mandibles underneath the ant’s abdomen. The mandibles are hollow and are able to inject venom and digestive juices. Here’s a video I posted on Twitter:

If you have time to waste, I highly recommend watching this YouTube video of a trap-jaw ant escaping an antlion pit. Per Fredrick Larabee‘s research, 15% of the trap-jaw ants can launch themselves to safety by snapping their jaws open.

Disholcaspis quercusvirens galls on live oak. Many of the pics online seem to have ants, and that’s apparently because the gall (like other cynipid galls) excrete something sweet to attract them, potentially as a way to cut down on parasitoid attack. Here’s a pic of the resident. These galls are formed by the asexual phase of the wasp; see figure 1(E,F) of this paper for photographs of the sexual-phase galls.

Basilica orbweaver (Mecynogea lemniscata) with egg cases. Per this site, basillica orbweavers take down their webs every day and use them to wrap the egg cases. But perhaps that’s a variable behavior because my photograph doesn’t seem to show it. These photographs definitely do.

Ant-mimic sac spider. Either Castianeira floridana or C. descripta. If you have a vote, please leave it at the iNaturalist observation. Not sure which ant species it mimics. Could also be a Mutillidae mimic. E.g., looks similar to both the Klug’s velvet ant (Dasymutilla klugii) and the magnificent velvet ant (Dasymutilla magnifica), though neither occurs in Florida.

Gopher apple (Geobalanus oblongifolius), a favorite of gopher tortoises (Gopherus Polyphemus). The fruit is said to have an aroma similar to a freshly unwrapped plastic shower curtain. But quite tasty, apparently, if you can find a ripe one that the tortoises have missed. I still haven’t seen a gopher tortoise.

Florida prickly pear (Opuntia austrina), I think. If you have an opinion, here’s the iNatualist observation.

Here are all of my photographs from the park. 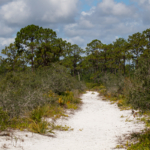