In nature, tunnel-nesting bees are perfectly happy to use logs riddled by boring beetles or piles of dead plants that have hollow stems. That habitat is often in short supply in many yards, however, so it’s necessary to provide hotels if you want to attract them. These hotels can be as simple as a large coffee can filled with hollow reeds … or as elaborate as the three-level one I built. The bees really don’t care.

DIY bee hotels can be filled with routered nesting trays (you can buy these or make your own, if you’re handy), wood blocks with paper inserts (these inserts can be purchased), wood blocks or logs with drilled holes (unlined), or just sections of hollow stems (by far the easiest). Or, like house in the photo below, a mix. A hotel should have a roof to keep the tunnel entrances relatively dry, should be situated to get morning sun, and be approximately 5 feet off the ground (so you can enjoy watching them).

Below is a photograph of my other hotel. It’s smaller and is set up in my front yard to entertain people who walk by. Tunnels are all unlined drilled holes, plus milkweed stems. Holes in the blocks are varied because I want to attract a variety of solitary bees.

The ideal bee hotel is one that allows all the nesting material to be removed each year (or so). By installing fresh nesting material, new tenants each spring will get to move into tunnels free of kleptoparasitic pollen mites and pathogenic fungi. Another benefit of removable nests is that you can remove sections as they get filled, allowing you to replace the spot with the same type of tunnels or with tunnels that have different diameter to cater to a different bee species (there are hundreds). Below are examples of my hotel with different configurations (my 2020 version, on right, is a bit boring).

What do you do with the nesting material after you remove it from the hotel? I put mine into a large cardboard box that has holes in the sides and at the top, then store in my unheated garage for the winter. In mid March (before bees in my area start to wake up) I put the box outside in a spot that is dry and gets good morning sun. Then when bees emerge from their cocoons they can escape from the box but are disinclined to re-inhabit the nesting tunnels they emerged from. Here’s a view of the nesting material inside my emergence box.

After several months outside (e.g., in August, long after the last resident has emerged) I take everything back into my shop and redrill holes and sterilize the wood. Then I can reuse blocks in future years.

Lately, I’ve been thinking that I should move entirely to a system where I can sort through pupae at the end of the season. E.g., as summarized here. The reason for this is that I’d like to remove (kill) the kleptoparasitic mites (pic) and Houdini flies (pic) that are likely destroying many of my solitary bees. To enable this process I am going to start using paper straws to line all the tunnels. These straws can then be removed and unwrapped and the contents examined. Below is a photograph showing how drilled holes can be lined with paper straws — just fold over the back overhang and seal with foil tape.

Several companies sell sturdy (and easy to unwrap) paper straws as well as cardboard tubes that can easily accommodate the straws (i.e., you don’t need to drill holes in wood).

Another way to sort through pupae is to use routered wood trays, which you can buy or make (with a router or a table saw). Although some types of trays are better used with straws (to prevent mites from moving from tunnel to tunnel), others fit snuggly enough to be used without them. On my list of things to do is to make some routered nests that are sealed on one side with Plexiglas so that I can observe the bees within (such hotels can be purchased, and are beautiful).

If you’re lazy and just want to buy a mason bee house, here’s my draft listing of companies that seem to make good ones. Please also see my guide to bee houses you should avoid.

This post contains photographs and construction tips for a killer craft I made: an autocidal gravid ovitrap. Pregnant females enter the trap, lay some eggs on or near the stagnant water within, then are prevented from exiting and die. Their progeny also die because a screen at water level prevents larvae from reaching the surface to obtain oxygen. When similar traps have been deployed they bring down mosquito levels substantially and thus are quickly becoming one of the main ways to prevent mosquito outbreaks and disease. Every homeowner should have six. They’d make wonderful gifts.

The design features a clear dome that helps trap the females when they are done ovipositing (they go for the light), plus a completely unneeded observation window so I can watch the larvae and pupae (fun for the whole family, plus good for demonstration purposes). It borrows general methodology from gravid Aedes traps (GATs) designed by Dr Scott Richie (James Cook University) and colleagues that recently made news on NPR (here’s an overview; here’s their paywalled journal article). I’ve designed mine to capture species that also lay egg rafts, so it’s not just a GAT. My design doesn’t use insecticide because I wanted the odor of developing larvae to be an attractant to other females (it is, by the way).

If you’d like to see photographs larger just click on first image and navigate like a slide show. There are many ways to construct these so if you build one and it looks completely different, don’t worry. This is because if your device is the only stagnant water around, females will use it.

I’ve only just deployed it and it’s rather cold right now so I don’t have any victims yet. But I’m optimistic and am posting now with the hope that somebody will have suggestions on how to improve the design (I’m making more). One improvement I’m definitely going to make is to drop the funnel lower into the dome so it’s harder for females to accidentally fly straight up to escape. And pro-tip if you make the above: attach the lid to pail when spray painting to avoid unwanted buildup where they attach.

I’m also posting in the off chance that a biology teacher might take an interest. Having teams make these would be really fun and then they could deploy them in the woods near the school: bonus points for team that traps the most mosquitoes. It’s fun like the classic egg-drop lab in physics except useful. Students would then take their projects home where they’d continue to be useful. Would make for a great Girl Scout Gold Award / Eagle Scout project.

If all of the above sounds like way too much work you can buy them: Biogents GAT Trap (my favorite), Catchmaster Ovi-Catch AGO, Dalen Skeet-O-Trap, Springstar AGO, and Ultimate Mosquito Traps.

Barrera, R., A.J. Mackay, and M. Amador. 2013. A novel autocidal ovitrap for the surveillance and control of Aedes aegypti. Journal of the American Mosquito Control Association, 29:293-296.

Mackay, A.J., M. Amador, and R. Barrera. 2013. An improved autocidal gravid ovitrap for the control and surveillance of Aedes aegypti. Parasites and Vectors 6:225.

Paz-Soldan et. al. 2016 Design and testing of novel lethal ovitrap to reduce populations of Aedes mosquitoes: community-based participatory research between industry, academia and communities in Peru and Thailand. PLoS One 11:8. 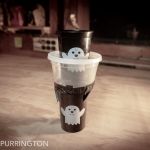 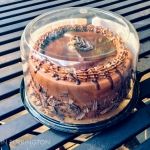 Buy an 8″ cake for the clear dome on top. Eat cake. 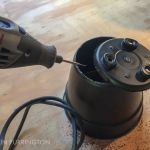 Cut off bottom of pot, use knife to smooth edge. 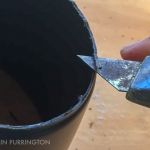 Shave off rough edge of funnel with a knife. 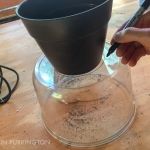 Draw circle on dome where funnel will drop in. 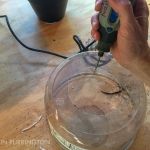 Cut hole in dome with Dremel to accommodate funnel. 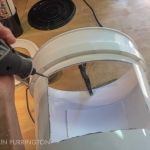 Cut observation window into side of pail. 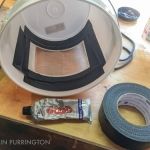 Glue soda bottle plastic onto inside of observation hole. 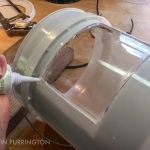 Apply bead of silicone sealant to outside of observation window. 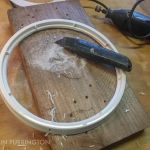 Cut hole in pail lid with Dremel, then smooth the cut with a knife. 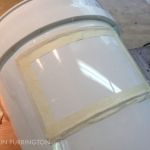 Cover observation window prior to painting. 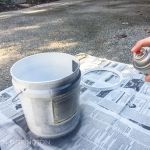 Paint outside of pail and lid black. 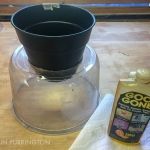 Glue funnel onto dome. Use Goo Gone to remove labels. 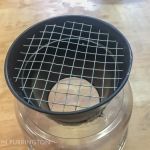 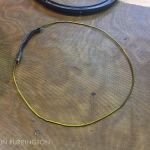 Bend coat hanger into diameter equal to inside diameter of pail. 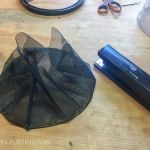 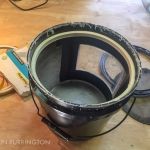 Affix weatherstripping to inside of pail to support the screen. 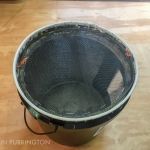 Make handles for the screen out of paperclips. 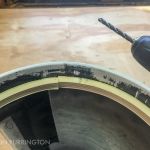 Drill drain holes so that water line is barely above screen. 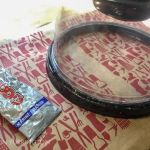 Attach clear dome to pail lid with anything but Goop 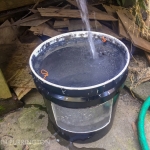 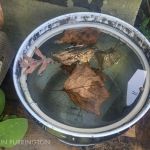 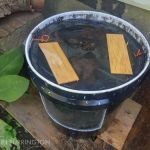 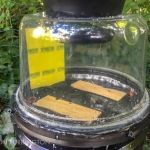 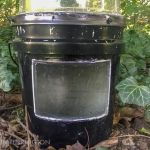 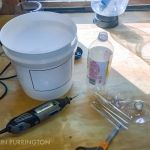 Cut rectangle out of soda bottle for viewing window.