Research conducted in Florida found no evidence that Spartan Mosquito Eradicatiors are effective mosquito-control devices. Below is my reconstruction of the two experiments they conducted. One was in the laboratory, one was outside.

Below is a rough reconstruction of the laboratory experiment they conducted. In each of the cages (BugDorm-2120), 100 male and 100 female tiger mosquitoes (Aedes albopictus) were released, then monitored for mortality at 24, 48, and 72 hours.

Here is a photograph of one of the choice cages:

Below are the cumulative mortality data for the three cages. The Spartan Mosquito Eradicator filled with the provided packet ingredients (treatment) did not result in higher mortality. I.e., there was no evidence the device killed mosquitoes under laboratory conditions.

The researchers also conducted a field experiment using two sites that had large populations of tiger mosquitoes (because of the presence of tires). At each site they deployed five tubes (separated by 4 m), switching whether the tubes were “treatment” or “control” tubes every 2 weeks. A BG-Sentinel trap (without carbon dioxide) was used to quantify mosquito numbers every week.

The scientists concluded that “Both laboratory and field components of our study show that the Spartan Mosquito Eradicator is not effective in reducing abundance of Ae. albopictus.” They speculate that the contents do not attract mosquitoes and that the holes on the device (~3 mm) are too small for mosquitoes to easily reach the fluid inside. They also highlight the need for an experiment to evaluate whether the active ingredient (1% sodium chloride) kills adult mosquitoes. I.e., even if mosquitoes were attracted to Spartan Mosquito Eradicators and could easily get inside, the salt might not be lethal.

Update: the salt experiment has been conducted. And the result is that salt does not kill mosquitoes.

Here are some photographs of greenhouse camel crickets (Tachycines asynamorus) that I recently found in and around my house. It’s called the greenhouse camel cricket because when it (and related T. japanica) first came to Europe from Asia it was a common insect in conservatories. I’m not positive, but I think before that invasion the name “camel cricket” was more commonly applied to the praying mantis (mantids have long necks just like camels).

Note that the Latin name for this species used to be Diestrammena asynamora. Full details are in Qin et al. 2018. Nobody seems to use the new name except iNaturalist. But I use iNaturalist a lot so I’m going to give the new name a try.

This is a juvenile that I found in my bathroom sink. I think they go through 10 instars and I’m guessing this is a 3rd instar male (lacks an ovipositor). It was pretty cute.

This is the same individual as above but shows the ovipositor and impressive length of the antennae. The antennae apparently have the ability to sense heat. That’s probably a fact most people don’t want to know.

This female was in the woodpile near my garage. It was a cold day so she didn’t immediately launch herself away. They often seem to jump at you, a behavior that doesn’t endear them to folks who think the crickets are actually spiders. I think their jump can max out at 1 1/2 meters, which is pretty impressive. They can’t fly, though, because they lack wings (and are thus silent). Note that placing woodpiles near your house is one way people inadvertently introduce camel crickets into their houses.

These three gooey splotches are frass. If you have a large population of camel crickets your wall will become darkened with this spots. I’ve been trying to figure out why they are liquid but haven’t come up with any explanations yet.

If you’re fascinated by greenhouse camel crickets there’s a great article at Your Wild Life that describes how different species are invading the United States. If you just want to kill them I have a few ideas.

Last week when I was at Ridley Creek State Park I crossed paths with a tree tour led by wildlife biologist Gary Stolz (PA Dept of Conservation and Natural Resources). I promised the group that I’d post photographs of things I’d seen at the park. Here are the highlights:

The largest and most colorful was clearly the long-tailed giant ichneumon wasp (Megarhyssa macrurus) that I found ovipositing into a red maple. Actually, there were perhaps a half-dozen of them, all presumably targeting the larvae of Tremex columba (a sawfly) that were busy eating the tree. The presence of the sawflies is given away from probably a mile away (I’m guessing here) due to the odor of the symbiotic fungus they use to help digest the wood. Once on the tree, though, the ichneumon probably locates a larva by sensing the vibrations it makes when chewing. The ovipositor is approximately 2″ long and is tipped with a cutting edge (as you might guess). It also drips out a fluid that helps dissolve the wood. An amazing insect to watch.

Also on the same tree were several Green’s giant ichneumon wasps (Megarhyssa greenei). This species has a shorter ovipositor (among several other differences) but does pretty much the same thing as the species above.

Also beautiful but much smaller (perhaps 12 mm), I found this wasp ovipositing into a nearby tree that was completely dead and covered with moss. I’m still working on an ID (it’s something in the Ephialtini). Which means, like many of the insects I photograph, I’m hoping that an expert will eventually help me identify it. Sometimes that process can years but I’ll update this page if there’s any movement. For those curious, I post photographs to iNaturalist and BugGuide for help. And I often ask my Dad (Foster Forbes Purrington), an entomologist.

The last wasp of the day is Coelichneumon navus, another ichneumonid but with a concealed ovipositor. This species has been known to parasitize fall webworm (Hyphantria cunea) and cypress looper moth (Iridopsis pergracilis), but like many of the 100,000 or so members of the family Ichneumonidae not much is known about its natural history. I found two caterpillars on this tree but haven’t yet ID’d them.

Another insect with no common name, Gnophomyia tristissima live, love, and die around rotting hardwood logs. These are crane flies and can be identified by their bright yellow halteres (remnants of their second pair of wings) and black bodies. This photograph shows mating but afterwards the male seems to guard the female while she oviposits (if you want to see that, click on image to be taken to a site that has additional photographs). I spent about 30 minutes watching and photographing them and could have stayed longer. But the mosquitoes were exsanguinating me.

Earlier on my walk I found a rather orange American nursery web spider (Pisaurina mira). It was also rather large.

I can usually narrow down spiders given their eye arrangement and details of web (or lack thereof), but this is stumping me. My tentative guess is that it’s a freshly-molted (teneral), juvenile banded fishing spider (Dolomedes vittatus). I’m trying to get this confirmed so check back if you’re curious. Astute readers will notice that it’s on a tree, not near water, but apparently there are few members of Dolomedes that can live away from water just fine. This is one of those species.

This was the first time I’ve seen a northern water snake (Nerodia sipedon) but apparently they are super common. This one was perhaps 2 feet long but they get as big as 4 1/2 feet. Non-venomous, though, in case you were wondering.

I’m still working on an identification but my current guess is sulphur tufts (Hypholoma fasciculare). Or, if you prefer, sulfur tufts. I really enjoy photographing young mushrooms but the consequence is that they are harder to identify.

That’s it! If you have any questions, send me a note or leave a comment. 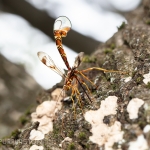