During a 2008 trip to La Selva Biological Station in Costa Rica, I took a terrible photograph of some lesser sac-winged bats (Saccopteryx leptura) roosting on the underside of a tree. 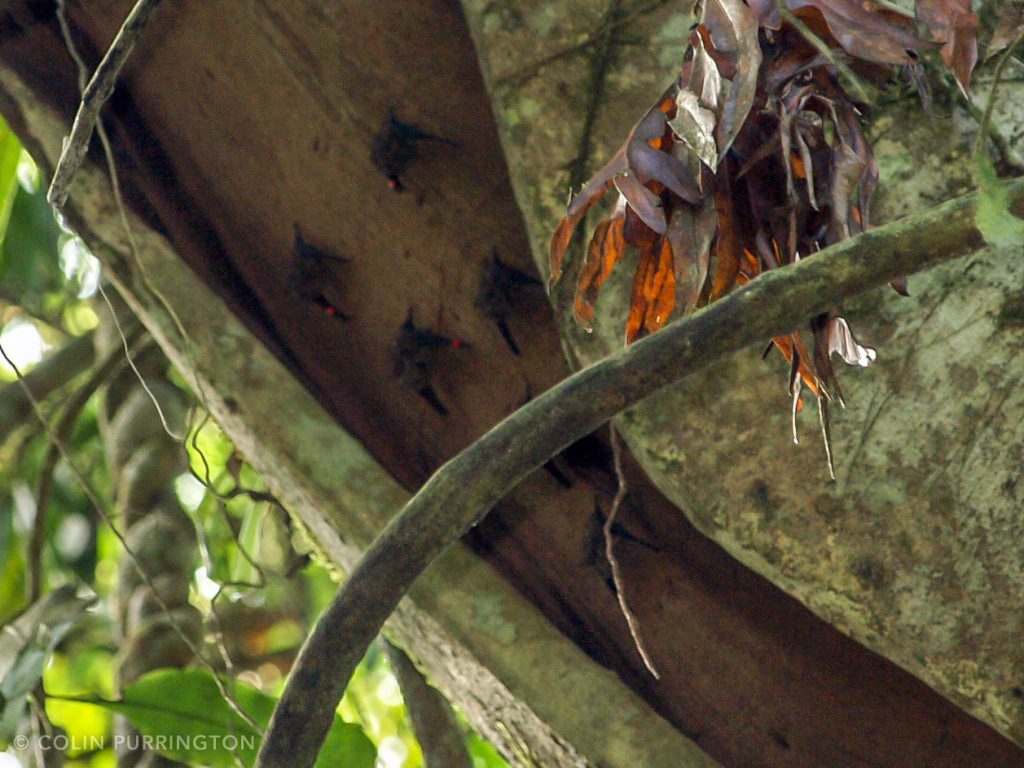 I kept the photograph because the bats seemed to sporting some strange red dots that were the color of giant red velvet or trombidium mites, and I was curious. But I looked online (for years) and for the life of me couldn’t find any reports of something that large on a bat in Costa Rica. All I succeeded in discovering was that quite a few smaller mites seem to be found on bats (Banks 1915; Klimpel and Mehlhorn 2013), with new species found all the time.

One person suggested that they might be chigger mites (Trombiculidae). Each spot, perhaps, would be composed of hundreds of mites feeding together. Chiggers feeding in a group isn’t rare, apparently. If you search for “trombiculidae aggregation” you’ll get lots of images of seething groups (e.g.) on all variety of animals. But it begs two questions. Why does each bat have only one clump, and of the same size.

UPDATE: After posting and sharing on Twitter, Sean McCann sent me a message asking whether my dots might be marking bands. He also sent a photograph (a good one) in which the locations of the bands exactly matched where my dots are in my photograph. So I contacted Dr Carlos de la Rosa, the Director at La Selva Biological Station, to see if anyone was banding bats at the time, and he responded that it was likely … and is checking to see exactly who. I’ll post an update if I hear back.

UPDATE II: Dr de la Rosa spoke with Dr Martina Nagy, who claimed those bats as part of her research (as well as corrected my species identification; they are not rhinoceros bats). She even recognized the tree (“SOR 170 Sendero Oriental”). These individuals (two males, one female) had been banded by Dr Barbara Caspers. The tree eventually fell and then the bats disbanded to someplace else.

It took me almost 10 years, but I’m glad I finally know what was going on. That photograph had really been bugging me. Thanks, everyone!

2 thoughts on “Bats with red spots”